I’ve played a few more games of Fury of Dracula since I last spoke of it. You know what? I getting to like it more and more.

Early advice, and games, indicated the best strategy for Dracula was to run, run, run. Many people bemoaned “Fury of Dracula is a bit of a misnomer. Shouldn’t it be The Fleeing of Dracula?” Well, let me just tell you how these couple of games have panned out.

The first was a bad one for me. I was Dracula and the very first card the hunters drew for me was Evasion. This is the big, key, “get out of jail free” card for Dracula. I can teleport to any city on the board… but drawing it first? Useless! I was nicely squirreled away in Eastern Europe and without even a full turn finished yet, that was something the hunters certainly couldn’t have known.

I decided I’d pretend to evade, so if they found my starting city they’d think my trail was broken (but it wasn’t!) Next, the hunters drew Newspaper Reports which reveals the last city on Dracula’s trail. Since all I’d done at this point was faked using Evasion my starting city was revealed. The annoying thing here was Newspaper Reports says that if the card would reveal Dracula’s current location, it doesn’t work. So this would have done nothing for the hunters if only I’d opted to NOT use Evasion!

Map of Eastern Europe as defined by the 2007 Time Almanac (Photo credit: Wikipedia)

The other thing here is if I’d decided to bounce to the other side of the board with Evasion – just because I could – Newpaper Reports would have revealed exactly nothing about my whereabouts. My brother correctly surmised I probably didn’t go far from my starting location so turned to Eastern Europe to corner me. Well, long story short, he was sharing my city on practically the next turn. It was ridiculously uncanny that he guessed that I’d faked Evasion and which city I’d ended up in. So we fought during day time, and I lost a huge chunk of health before slipping away.

By then, though, they were hot on my tail and I was hurt. I probably could have made it to a port, slipped out to sea and gave them a merry chase for 2 hrs but there was really no point. They would have got me in the end. There was no opportunity to drop a New Vampire and I couldn’t survive for 6 days and nights to secure victory. So after just 20 mins, I conceded.

We jumped straight into another game, since that one went so quickly. This one went far more normally. It went for 2 hrs and I had decided to start in Ireland. It was a game of “double-think.” You see, Ireland only has two cities, so after two moves I’d have to take to sea (which they’d see.) However! I had correctly surmised that they’d know, that I know that… and therefore would assume I’d be anywhere BUT Ireland, pretending to be in Ireland. Unfortunately for me they drew a card early on that let them check any city on the board. They just checked one of the Irish cities (just to be sure) and confirmed I had, in fact, just boarded a ship from Belfast.

Well, after that I dropped on Mina who was looking for me in London, and I successfully bit her. This gave me two points. That same turn a vampire I’d left to mature in Belfast matured (just a turn before Val Helsing would have arrived to stop it.) That gave me 4 out of 6 points. 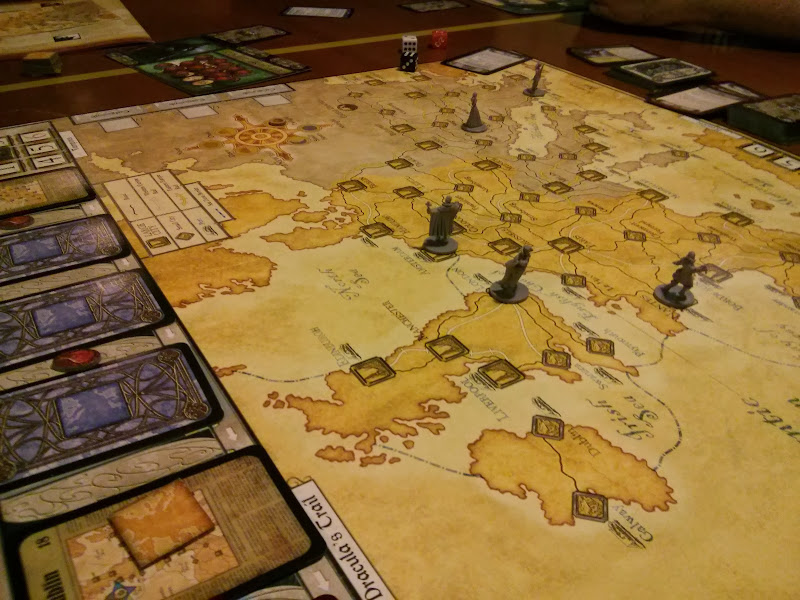 Meanwhile I’d taken to sea and fled to Spain. My opponents calculated I could have disembarked at any one of up to 13 cities… but it’s really quite amazing how quickly they can work you out with a process of elimination.

I had considered circling around the UK and landing back in London, but they seemed poised for that move. So, as I said, I fled to Spain and Portugal figuring that while the most obvious move, with all the other options on the table they couldn’t possibly cover all their bases.

I was right. They decided they simply couldn’t check the UK, so abandoned it. (CURSES!) Then made a bee-line for Spain, as the most likely drop-off point (clearing up other possibilities on the way to eliminate them.) Not long after I landed the next day dawned and gave me 5 out of 6 points. I only had to make it until the next dawn to get my final point.

Well they had me cornered at one point, so I used Wolf Form to slip past … but they guessed what I was doing and then proceeded to surmise the city I’d skipped to. My brother’s ability to predict my moves is ridiculous. At the time they worked out my Wolf Form trick AND which city I’d run to, they actually hadn’t seen any of my trail since London. Simply through a process of elimination and guess work they more-or-less knew where I was. We fought in Bordeux and I bit him. Unlike Mina, this doesn’t kill my opponent outright – but it does let me fly up to two cities away (even though they’d tried to play garlic to keep me in place.) The two city headstart was all I needed to finish off the day and win. Scarily enough, a second hunter could have entered Bordeux the same night, so if I hadn’t successfully bitten him, I would have had to survive battle with him for 3 more rounds then faced a second (who I believe was packing garlic too.) Even with such a tremendous start I still could have lost it there.

We have played once more since then. In that game my brother bit Mina twice and survived 2 days to win the game. The amusing thing is that I had coaxed my fellow hunter to move into Paris then out of the blue said: “Well I’ve been keeping this to myself, but I suspect Dracula is actually hanging out in Spain. Why don’t you catch one of these fast Paris trains down there and surprised him?” Mina did and amazingly dropped right into the town Dracula was in. (That’s how she got bitten the first time.) So it seems a brother’s uncanny ability to guess cities cuts both ways.

The other take-away after those two games is that Mina is a real weak point for the hunters. We knew she would be, but so far it seems like the strongest Dracula move to play is to try and bite Mina on the first night, and even possibly on every night. Everyone else had recommended fleeing and trying to mature vampires but we’ve found it impossible to shake the hunters once they pick up the trail, and they always do on the first day or night (and if not, it’s the first thing they do with the Resolve they get on the start of the second day.)

I’m going to see if I can supervise a game at a Halloween party this weekend. Let’s see how it goes, shall we?

3 thoughts on “The Fury of Dracula (and he was FURIOUS)”