It fails on multiple levels:

1. It’s not as thematic. In some ways, it’s ok. It is “pursuing” the humans. But! It is entirely possible for the human fleet to “jump away”, only to have the Cylon Fleet arrive the very next action. Of course – this happens with the Cyclon Attack Cards (CAC) as well, but the silly thing about the CFB is you can SEE it is about to jump in, so the correct Human response – IS TO TRY AND DELAY JUMPING. Their best bet is to let it jump in, then instantly jump away. It’s stupid.

2. It encourages enormous amounts of “gaming the system.” Board games can only capture the theme so far. Afterall, as Anders I used my Longshot ability to make a Cylon raider blow up a viper. How does that work, exactly? But, come on! When I get to pick the destination, and it includes a basestar – shouldn’t I be saying “Whoa! Do I really want to tangle with a basestar right at the start of the jump cycle?” rather than: “You little beauty! A basestar! Now the CFB doesn’t work at all!” It was just gravy that it was a crippled basestar without a hanger: 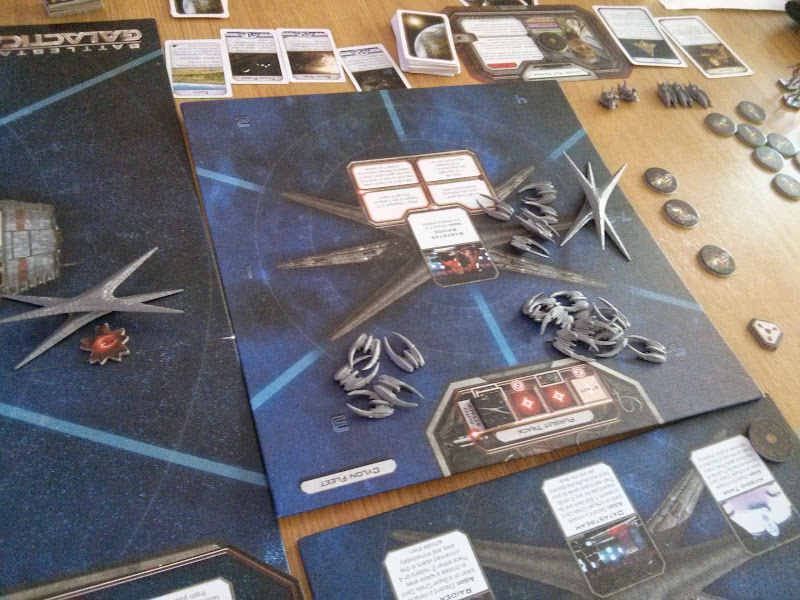 If you don’t realise it: that means the only cylon activation icon that does ANYTHING AT ALL, is “basestars fire missiles.”

Not an isolated incident, either. Earlier in the game we had this fun scenario: 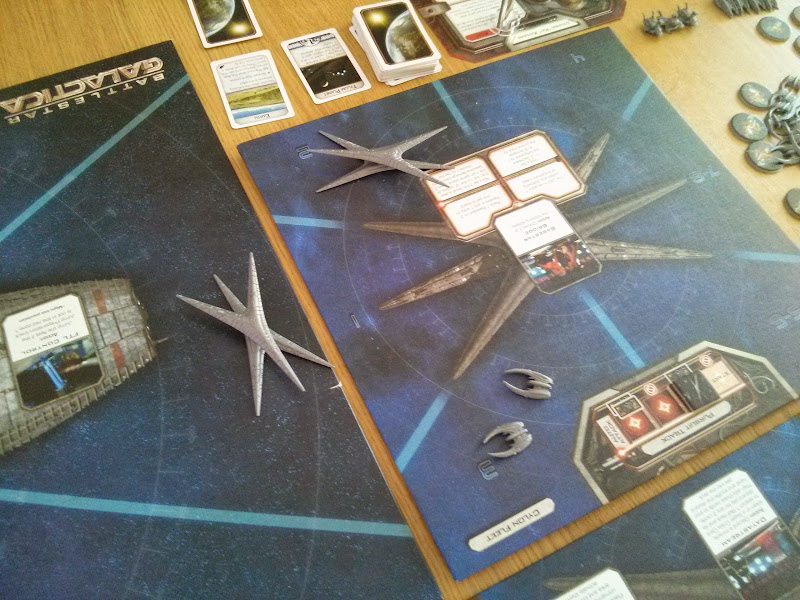 3. It makes life easier for the humans. This is yet another statement I’ll happily admit is NOT corroborated by the forums, but in my experience the CFB makes things much easier for the humans. Our group needs that, but the other annoying issues ends up turning us away. Not only is it reasonably easy to game the board, but when you see the fleet is inevitably going to arrive, the humans are ready. The ridiculous ability of vipers to escort civilian ships off the board (combined with civilian ships appearing on the board before the fleet arrives) means with a quick Executive Order (XO), the CAG can clean up most of the civvies. Next, the fleet arrives (to chase a measly 1 or 2 well-placed civvies) so the humans instantly nuke it (with Strategic Planning that’s nearly 40% chance of wiping the vast majority of the fleet away) or use some other tool at their disposal (e.g. Best of the Best to simply roll a dice, and destroy that may Raiders. Better than a nuke, sometimes!)

Meanwhile, with CACs, you can never be entirely sure when a good time to nuke, or use Best of the Best will be. You could blow up ships, only to have new ones jump back in at any time. If a lame attack occurs, and the humans aren’t worried about it, a new attack could fall on them at any moment. They have to be constantly thinking about the space area. With the CFB, the humans certainly have to pay it some attention, but it mostly just to game it, to make sure it’s not going to be a problem.

I admit – it CAN be a problem, despite the gaming of the system. If the humans get stretched too thin, a CFB attack could be just what sends them over the edge. OR, even better, is if a cylon can bring the fleet in, but that rarely happens.

You make me sad, CFB, and I will miss the CAG title and Viper mark VIIs… but you are being packed up and not used again.

One thought on “Cylon Fleet Board Fails Me Again”